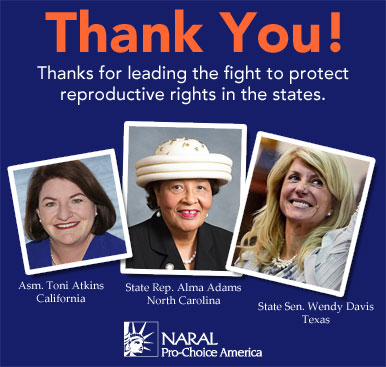 We’re delighted to join NARAL Pro-Choice America in honoring Rep. Alma Adams! Rep. Adams has spent nearly three decades fighting for women and families and, she helped lead the fight against the now-infamous “motorcycle safety” anti-abortion bill which the legislature rushed through at the last minute to bypass any opposition from pro-choice elected officials.

Rep. Adams had this to say about the bill she tried to stop:

State lawmakers like Rep. Adams truly represent the pro-choice majority, and they champion women’s reproductive rights in states like North Carolina that may need them the most.