In 1973, the Supreme Court of the United States made a decision on a case out of Texas that gave women in the United States the right to choose to get an abortion; a decision that women are still fighting to have respected. Forty-three years after Roe v. Wade, the Supreme Court will hear another case out of Texas, one that will also leave a lasting impact on reproductive rights, for better or for worse.

The case, Whole Woman’s Health v. Cole, centers around HB2, a bill passed by the Texas legislature in 2013 that enacted new restrictions for abortion providers. The law required any physician performing an abortion to have admitting privileges at a hospital within 30 miles. It also mandated that abortion clinics meet the building requirements of an ambulatory surgical center including having 8-foot-wide hallways and two janitorial closets; requirements that clearly would have no positive impact on the health or safety of women seeking abortions and were not imposed on any other types of medical procedures.

Represented by the Center for Reproductive Rights, Whole Woman’s Health, along with other clinics, challenged the law based on the undue burden standard established by the Supreme Court in Planned Parenthood v. Casey. In Casey, the Court ruled that any law whose “purpose or effect is to place substantial obstacles in the path of a woman seeking an abortion before the fetus attains viability,” unconstitutionally placed an undue burden on her access to abortion. Whole Woman’s Health’s challenge to HB2 is based on the fact that the regulatory burdens imposed by the law would “dramatically reduce the number and geographic distribution of medical facilities in the State where women can access safe abortion, while providing no benefit to abortion patients whatsoever.” The cost involved with complying with the requirements of HB2 would shut down three-fourths of the clinics in Texas, leaving only 10 abortion clinics available for a state of almost 27 million people.

The Supreme Court’s decision in this case will clearly have an impact on the women of Texas but it will also determine the ability of North Carolina women to access reproductive care. During just the past few years, we have seen several new barriers to abortion access under the guise of protecting women’s health and safety. In fact, the requirements of HB2 might even sound familiar to North Carolinians who remember SB353 passed in 2013, otherwise known as the Motorcycle Vagina law. If the Supreme Court upholds HB2, not only should we expect to see more TRAP (Targeted Regulation of Abortion Providers) laws but we should also expect a wide variety of other deceptive laws that would create higher costs, lengthier delays, and additional obstacles for women seeking abortion care. On the other hand, if the Supreme Court finds HB2 to be unconstitutional, laws such as our recently enacted physician reporting requirements could require a legal determination of whether they cause an undue burden. North Carolina legislators would finally have to answer for all the unjust laws they have put in place to shame women away from utilizing their right to choose. 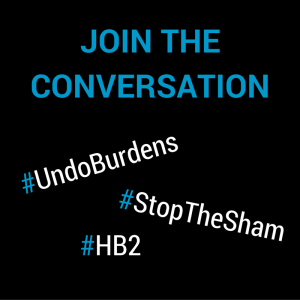 While we know that there is a risk that the Supreme Court may put an end to Roe as we know it, there is also the strong hope that this decision will put women several steps closer to being able to fully exercise their right to choose.

The case is likely to be heard in late February or early March with a decision by June. Keep reading the NARAL Pro-Choice North Carolina blog for updates on the case!

One thought on “Reproductive Rights at Stake in the Supreme Court”